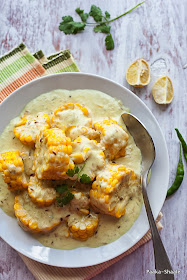 I was taking look at all my previous posts and I realized that except for Mandazi, there were no African recipes on this blog. That's surprising because, East Africa, has been my home for the past seven years. Although, I have not tasted many African dishes, there are a few that I really like. Among the very few that I had tried, Makai Paaka was one of them. 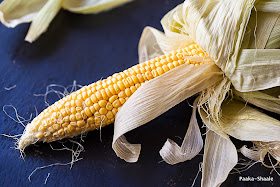 Makai Paaka is a Tanzanian dish. But it can also be found in the coastal parts of Kenya as well. This dish, I feel, sort of reflects the Tanzanian landscape. 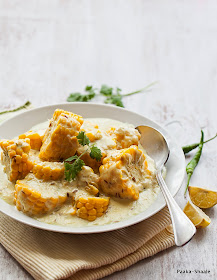 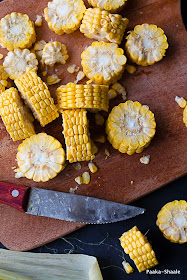 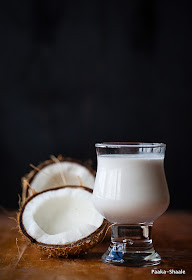 I was introduced to Makai Paaka through a friend. I remember her mentioning this dish during a casual conversation. When I questioned her about this, she went on to say that makai paaka was nothing Corn cobs cooked in coconut milk. I was intrigued. This dish certainly sounded unique. I had asked her for the recipe and I had resolved to make this curry soon. The next day, I was busy with the usual chores when I heard the door bell ring. I opened the door to find my friend's driver holding out a box to me. I opened the box to find sliced corn cobs in a pale yellow sauce. Yes, it was actually makai Paaka. My friend not only gave out the recipe but also made the curry for me and sent it. How sweet was that?? Somehow, the thought and the gesture made the curry even more delicious. 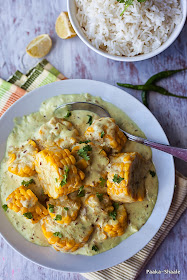 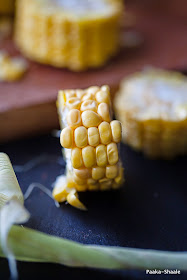 Makai Paaka is one of those dishes that makes you ask for more. There are these sweet and tender corn chunks that are enveloped in a velvety and creamy coconut sauce. Who can get enough of that? I suggest serving this dish with piping hot steamed rice. It makes the curry taste even better. Although I have presented the dish with a spoon and fork, it's much better to eat this curry with hands as biting the tender corn kernels and gnawing on the juicy corn cobs makes the whole experience of eating makai paaka pleasurable. 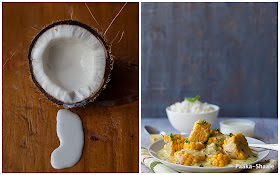 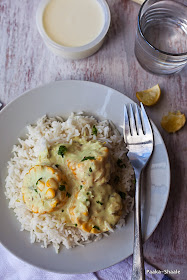